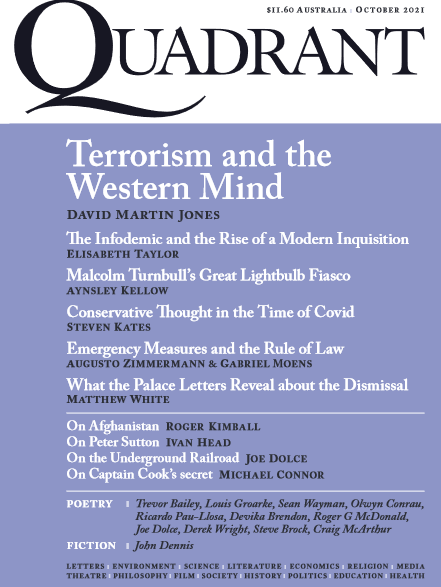 Under the heading “Searching the Poetic”, Ivan Head reviews four collections of poetry, Abundance being the second in the set. His generous and erudite review begins:

Metre and notes also need not be far away when turning to Andrew Lansdown’s wonderful book Abundance: New and Selected Poems. Not that the pursuit of either need detract from the splendid accessibility of this large and carefully chosen collection. For instance, “On Poetry”, the second poem, and reprinted from Counterpoise (1980), carries a dedication to William Hart-Smith, who had a significant influence on West Australian poets. Immediately, one can use the marvels of the net to track material on Hart-Smith and the interaction between these two and other poets before returning to the poetry itself. At the end of “On Poetry”, Lansdown writes of his infant son, not yet walking but sitting on his knee as he talks with Hart-Smith:

spasmodically stops
our talking with

a short sigh,
and lifts and drops

his foot rhythmically
on the flat of my thigh.

Lansdown is a poet of the embodied and deeply-observed world and, in the end, metre and rhythm in poetry will have more than a close relationship to the beating heart, the dancing feet and all human movement. It is a kind of incarnationalism. Auden’s persona in “The Shield of Achilles” was also looking for figures dancing. To read Lansdown’s new book is to become open to a much wider world.

One earlier publication, Abiding Things, is not represented in this volume. I note that critics of that book said significant things about Lansdown. Les Murray wrote in the Sydney Morning Herald: “He espouses … an aesthetic of small observations”. Rod Moran in the Fremantle Arts Review wrote of Lansdown “lifting the veil of familiarity from the world”, and Philip Salom in the West Australian called him “an imagist of the highest order”.

Micro-observation can go hand-in-glove with a larger metaphysic, even an off-stage metaphysic that is made by the poet’s mastery of the art to serve the poetry, and where the poetry is not a convenient footstool for other concerns that in the end dominate. In that sense of micro, there is something dense and condensed in Lansdown’s poems, a vision lurking. I’m happy to call Lansdown a metaphysical poet. Blake could write in an observational-micro that evoked London in detail, though perhaps his larger vision became obscure in the longer poems. They became seriously esoteric, seriously gnostic. …

Read the rest of Ivan Head’s review of Abundance here.