“As has been demonstrated in his earlier collections of verse, the West Australian poet Andrew Lansdown is an imagist of almost unlimited inventiveness. His observant eye can graze, can focus on the tiniest quiddity and make it perpetual, or it can feast on a subject and draw out an inexhaustible wealth of comparison. This new collection shows that his ear is equally acute, attuned to the stretchy voice of a gibbon in the zoo, or to the speech of crabs. Unobtrusively, he is also a master of movement, catching the fine motion of life in supple reflexes of words, and his whole work is informed by a moral integrity which proves, on attentive reading, to be its very spine.

“There is in this collection a deep sense of gladness. But there is also grief and yearning, as in the poems ‘The Horseshoe Shooter’ and ‘Far From Home, the Blower’. Through their diversity of form and feeling, these poems powerfully communicate the many concerns of this poet.

“Waking and Always has a strong delicacy about it … Lansdown is a master of the shortish poem of keen observation and succinct evocation.”
— Les Murray

“I admire greatly the way in which his world is full of the beauty, intensity and wonder of natural significances: birds, trees, colours, sounds, their permutations and human import. Such things are a touch of the eternal we can all experience.”
— Rod Moran, The Australian Teacher

New edition of Waking and Always 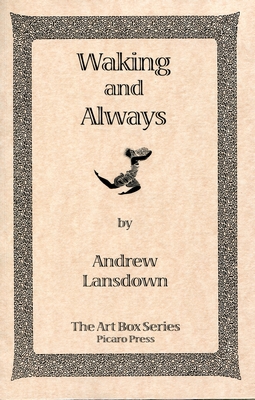 The Art Box Series aims to provide low-cost access to significant Australian poetry titles which, for whatever reason, are no longer generally available to the public.

Waking and Always was Andrew Lansdown’s fourth poetry collection, firs published in 1987. It helped cement his position as a leading practitioner in the imagist tradion, pressaging subsequent successful volumes Between Glances (1993) and Fontanelle (2005). He is also noted for his mastery of haiku and related Eastern forms which are well represented in this book. Lansdown is widely admired for his capacity to establish sincerity and tenderness without crossing over into sentimentality. Waking and Always treats both immediate family and experiences as a prison education officer in what has become Lansdown’s trademark spontaneity, precision, and lightness. [Rob Riel, Publisher]

Four poems from Waking and Always

It is almost dark. A car passes
without its lights on. My son shoots it
with the hook end of his hockey stick.
“It shoots horseshoes,” he says.
I imagine a horseshoe
lobbing neatly onto the peg of the driver’s neck.
“Piaow! Piaow!” cries my daughter,
improvising with her finger.
“Was this yours?” The old stick
is a new gift from his grandparents.
“No,” I say. “It was my brother’s.”
“Uncle David’s?” My daughter is merely
revising the relationships: Dad’s brother, my uncle.
“No. My brother Stephen. He’s dead.”
They are both suddenly quiet. Their father
has a brother who is dead. Our father.
“Did you have any other brothers?”
“Yes. Philip.” “Is he dead?” “Yes.”
The horseshoe shooter has become a music stick
piping death from the basket of my life.
It rises up, the old snake, flicks
its forked tongue, flares its hood, sways, holds
them mesmerised. “Were you grown up?”
They are thinking of each other now,
these little children, my son and daughter,
brother and sister. If Dad was a boy when …
are we safe? “Yes,” I say.
Well, almost. “Yes, I was grown up.”
They are relieved. But my daughter asks,
“And are you the oldest?”
“Well, I am now.” “Good,” she says,
as if all uncertainties were now
settled, as if night were now the only darkness
coming upon the world. “Good.”

Above the black soil of the bulldozed paddock
spiders have spun their threads
on upraised sticks and roots.
In the midst of anarchy, a small affirmation
of design. The webs,
wet with dew and infused with light,
are white pennants raised to proclaim
the mysterious endurance of the powerless.
Or they are bandages of fine gauze,
daubed where limbs have snapped, wrapped
to staunch the flow of beauty from the broken land.

And perhaps it’s only little things that will remain
to shore the heart against the broad and brutal ugliness
that looms as the destiny of man. Perhaps
small gestures—the weaving of poems
or the pursuit of a personal integrity
or an unfaltering faith that God is good and
good is no illusion—are all that is left to us.
Like the spiders, we bind the broken roots.
Not in truce, but on trust, we raise
our ragged, regal flags in the winds of a desolate age.

She Enters with Flowers

She enters with flowers, roses
in their European opulence,
pastel-pink and partly open,

and places them in a vase,
a squat stoneware bottle
laying blue in the lacquer

of the dark hardwood table.
Independent of intention, her hands
brush the blooms into a loose

She enters with flowers,
unsettles the room with roses.
Unable to work, I watch

a white, pin-head spider
parachute from the petals.
Halting mid-air, it hangs

against the crazed face
of the blue-glazed clay,
its cordage caught on a thorn.

Where has she gone? I do not hold her
as she sleeps in my arms. The tides of air
lift and let go her chest
with a delicacy that reminds me of death.
So slender, each breath! She is hot
and the sweat glistens like ground glass
on her scalp. Her eyelids are almond petals,
white, exquisitely veined with pink.

Finer than her eyelashes are fine,
yet greater than the delta of the Nile,
are the rivulets of blood in the hoods
of her eyes. The mastery of her!
No human design can hide the design in her.
She holds me as I hold her while she is held
by sleep. Her eyelids flinch and flicker,
brushed by the bright blackness of dreams.

Darling, it seems they would have us believe
that, back beyond the generations, you
and I and they—we all—were spawned
spontaneously from an inorganic soup.
They say it is “scientific”. But I know
it is unproven and unprovable, believable
only by faith. And it is a faith that fails
the facts. The facts, say, of your eyelids.

Child, I do not believe your eyelids
or the dreams above which they flutter
are accidental—a mere coincidence
of chemicals and light, a serendipity
of time and matter. I cannot believe.
I lack the faith. Daughter, dream this
true dream: Your spirit is the wick of Yahweh,
your body, the wax of His make and moulding.

Dream this waking and always. And burn
little candle! Burn brightly in the coming night!

Reviews of Waking and Always

Waking and Always by Andrew Lansdown, Angus and Robertson, $10.95

You will find with Andrew Lansdown’s book of verse Waking and Always a unifying force-field in the form of a deeply held Judeo-Christian metaphysic, with a corresponding morality. One does not need to share his religiosity, however, to appreciate the poetic achievements that this volume represents. Lansdown is a past master at performing one of the chief tasks of a serious poet: to lift the veil of familiarity from the world, to have us see things anew, to re-encounter what we thought we had understood, and to take another look at what we might have consigned to the margins of our consciousness.

Hence, in his intensely imagistic style, you will discover that the tiger snake is the ‘Shere Khan/of the Australian swamp’. A flock of ibis are ‘like elderly orientals/gathered for a festival’ and the casuarina tree is seen as a spider ‘spinning a wooden web’. It is also a ‘vertical glacier’ and a giant ‘nerve synapsed to the earth’. One poem along these lines that stands out from the rest is ‘Shodo Egret’. It is a delicately wrought observation, where the egret can be taken as a symbol for, amongst other things, the fragility of beauty, the vulnerability of the natural world in the epoch in which we live.

There are verses here also on love, on children, on freedom, about the warmth Lansdown derives from familial attachments, and poems about the delicate loveliness of flowers, water, trees and the positive currents of human life.

However, this poetry also explores a darker underbelly to the scheme of things. These pieces derive from Lansdown’s work in prisons and have to do with the grittiness, the ugliness and alienation of prison life and the small human tragedies each prisoner embodies in the penal context. They chronicle, but never in a sentimental way, the prisoners as human beings fallen from the grace of society, with one quite startling piece where he encounters what Hannah Arendt termed in another context ‘the banality of evil’. It is a small poem called ‘Sharing a Joke’:

They feel at ease with me,

treat me as an honorary crim.

I value their acceptance. But knowing

I turn away, unwilling even to grin.

The poem in Waking and Always that provides the essential key to Lansdown’s outlook is to be found towards the end of the volume. It is called ‘Not in Truce’ and its second stanza reads:

And perhaps it’s only little things that will remain

to shore the heart against the broad and brutal ugliness

that looms as the destiny of man. Perhaps

small gestures — the weaving of poems

or the pursuit of a personal integrity

or an unfaltering faith that God is good and

good is no illusion — are all that is left to us.

Not in truce, but on trust, we raise

our ragged, regal flags in the winds of a desolate age.

There is much in sentiments such as this that will appeal to a range of metaphysical positions, secular and celestial. The one criticism I have of the book is that I think there are two, possibly three, poems with a strong narrative framework that could have done their theme more justice in the form of a short story.

It was a delight to read Ron Pretty’s The Habit of Balance because, like Lansdown, he does refreshing and interesting things with technical forms that represent very well-trodden territory. If Lansdown can construct poems drawing on various forms from Japanese prosody that often have a gemlike imagistic beauty to them, Pretty can hone a sonnet sharply to great effect. …

Andrew Lansdown’s poetry has something of that aching, bitter-sweet quality C.S. Lewis called sehnsucht—the human longing for joy that is itself both a joy and a wound, a grief and a hope.

His words are full of what might be called pre-echoes of heaven, radar blips giving a clue about Reality coming.

Paradoxically, this yearning for as-yet-unrealised future perfection is rooted in a wonderful celebration of the here-and-now, particularly in nature.

There, wherever it remains uncorrupted, each created thing “enacts itself precisely” (“Choka for Sacred Kingfisher”)—a kind of prefigurement, perhaps, of that perfection of being that will be the essence of the New Creation.

Lansdown’s latest collection is Waking and Always (Angus & Robertson, $10.95). It is poetry to take home and love.