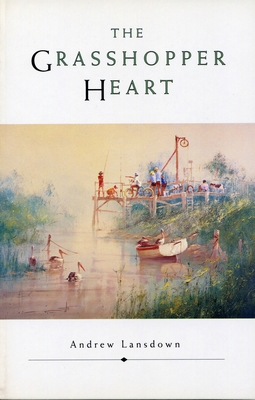 in progress, but to a new poem, this poem,
as a man who has been blessed returns
to his business but cannot resume
business-as-usual, being unsettled by calm.

Many of Andrew Lansdown’s poems have the power to bless, to unsettle now with mysterious calm, now with the deep resonance of poetry. Of all Australian imagists, he is the one with the broadest and warmest human sympathy, and no one writes of family love with more tenderness than he. Nor does anyone write with more perceptive courage about the dark things that move behind idyll, or the bland merciless enemies of human happiness.
— Les Murray

“Lansdown is a past master at performing one of the chief tasks of a serious poet: to lift the veil of familiarity from the world, to have us see things anew, to re-encounter what we thought we had understood, and to take another look at what we might have consigned to the margins of our consciousness.”
— Rod Moran, Fremantle Arts Review

Five poems from The Grasshopper Heart

The windmill is a dandelion
on a tall stem. Behold, above
the yellow-petalled paddock,
an inflorescence of iron.

The stalk is a lattice-work,
a high scaffolding,
upholding the enormous bloom.
Dusky wood swallows lurk

along the laterals, face
each other in their Zorro masks.
A wagtail swings like a vane.
The wind gathers pace.

A sheoak by the dam
shifts in her skirts,
curtsies to the drifting duck,
the drinking lamb.

The metal corolla begins to hum.
It whirrs and whirls
as if flicked from its stem
by an invisible thumb.

That man with the cowboy hat and tan and tattoos
is holding his little white-skinned daughter
very gently in the shallow water. Now he is
zooming her along, but not too quickly
for fear of her fear. He tosses her up,
catches and hugs her, holds in check
the fierce tenderness that craves to crush her.
Her father. His wholly holy love. He is smiling
and I know his heart is like a grasshopper—
leaping and landing spring-loaded to leap again.

Say “Quark!” they say,
my daughters.

I comply.
And quick as casual

their hands at me.
Inexplicable!

Father, poet, pelican:
I am hungry

This wildlife sanctuary: the last wetland on the Swan
River estuary. How long will it last? Some call it
wasteland, and few notice it at all. A patch of sedge

signals in semaphore to an inattentive world.
Samphires mat the mud-flats, their bulbous stems
like strings of red and green rosary beads. Bulrushes

grow on a bank, their cylindrical bales of wool
bursting open from the season’s rough, ripe handling.
With its numerous, invisible needles, the wind

knits the water plain and purled. Pelicans,
their wings unfurled, float fathoms above the cove,
caught in slow, wide eddies. Terns in turn

kamikaze the battleship-grey water, rise again
unhurt. A dozen black ducks at the water’s edge
quack quietly as they dredge the sludge. Stilts

step on their reflections with their spindly,
backward-bending legs. Cormorants practise Tai Chi
on wireless and weathered fence posts. An egret

stands without a mate beside a beached boat.
Also alone, a greenshank hunts along the sand-bars.
Soon others will come from Siberia,

charting their way by the changeless stars.

The mulies are in the harbour,
shoals of them, teeming unseen
in the opaque sea. On the wharf,

in rubber boots and yellow raincoats,
a team of professional fishermen
lure the fish with food and light.

They have hung a lantern, hissing
incessant warning, just above
the quilted surface of the quiet water;

and they have strewn pollard—
the pollen grains, the yeasty smell—
on the water, below the lamp,

above the submerged net—an iron hoop
looped with mesh, long and tapering
like a wind-sock. Near the net,

a ship shifts uneasily. Its rope,
a catenary from prow to bollard,
strains and straightens. Bilge-water

spouts from the hull. On the wharf,
an enormous, enclosed conveyor-belt
rolls on its gantry. Grain

cascades into the hold. Behind
the ship, winnowed by the wind
and stretching as far as the shining

of the harbour lights, barley husks
form a yellow slick on the black
water. Between the lamp and the net

the mulies, the bait-fish, swirl
like long-bodied moths. At a command,
the men hoist the net. It is a crucible

bubbling with molten silver.
Poured out, the fish separate
into small, oblong ingots. A young man

smooths them into shallow crates,
ready for freezing. But the fish
are not ready. Frenzied,

they flick and twist, scales flying off
like sequins from a silver purse.
Their gills gape, the red frills

The conveyor-belt and the bilge-pump
drone a duet to drown Death’s reveille.
The ship’s rope heaves and relaxes.

In a child’s hand, a line twitches
like a caught nerve. In the crates,
the fish have gone off the boil

and lay eternally still. The men
lower the net again. “Gonna be a good
night,” smiles one man, his hair

Review of The Grasshopper Heart

In The Grasshopper Heart Andrew Lansdown uses words with masterly precision to paint things as we have not previously seen them, but as we may be tempted to see them henceforth. His approach to his material is confident and systematic. And beguiling. Sometimes the images may veer towards the more outlandish conceit (‘The Windmill is a dandelion/ on a tall stem’) but in general we can accept and feel the legitimacy of these allusions and cross-references. Sometimes the images are so acutely accurate they have us asking ‘Why didn’t we see that same similarity, that resonance?’: ‘A wagtail swings like a vane’ (‘Windmill’); ‘The dead mussel shells are/ miniature, hard-covered books/ spread unread on the shore.’ (‘Summer’).

Lansdown’s book is a genuinely uplifting one. It is difficult not to feel embraced by his enthusiastic alertness to the natural world, its forms and creatures. A single well-placed exclamation mark can evoke a true moment of joy, that intake o f breath, as he observes his daughter eating some melon:

in the ripe flesh.

she smiles, a pip

slipping from her chin.

Even the title of this poem is a painterly one, and ways of envisioning transfuse the entire collection. Sometimes the extreme clarity of observation, the excruciatingly exact analogy, intensifies the subject matter to a vividly memorable degree. This is certainly the case with ‘The Four Men’ (awarded the Tom Collins Poetry Prize):

the fleece beside the tail

and snips. A crisp, fibrous sound,

to cut no deeper than the depth

of the skin. Blood spurts out,

a thin jet, as from a water-pistol;

Fortunately, beauty can be conjured just as graphically:

Robins set fire to the roadside;

rosellas fly up from the oats;

kingfishers reel blue from the skyline;

and magpies toss tunes from their throats.

There is much I would like to quote here, and many poems to recommend, but space does not permit. The Grasshopper Heart is a book anyone might read and enjoy and return to. It is also a book that any beginning poet could profit from reading, as its technical accomplishments and delight in language are manifold. Without this craft, without this shaping, poetry can but remain cold and inert.