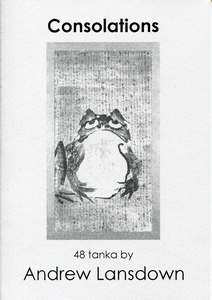 Lansdown is a master of the shortish poem of keen observation and succinct evocation. – Les Murray

Happy to be here
on this mild autumn evening
ambling by the marsh—
happy to leave the moaning
mainly to the moaning frogs.

We stand on the shore
and cast out to the dark sea.
We wait for something
unknown to bite, for the tug
at the line’s faraway end.

Ten weeks before
Christmas, the arum lilies
conduct their own
celebration of the Child,
waving candles in white cups.

The tanka is a poetic form with a long and rich history. It originated in Japan in the sixth or seventh century and quickly became that nation’s dominant poetic from. The first national poetry anthology, Man’yoshu, compiled in the eighth century, contains 4,500 poems, of which 4,200 are tanka. The 21 imperial anthologies compiled between 905 and 1439 contain over 33,600 tanka.

The Japanese word “tanka” means “short poem” or “short song”. True to its name, a tanka is a short poem consisting of five lines and 31 syllables. The lines are measured by syllables and form a pattern of 5-7-5-7-7 syllables respectively.

Arrangement of lines by syllables is a key feature of the tanka and this feature can be reproduced as effectively in the English language as in the Japanese. The 5-7-5-7-7 syllabic structure guides the phrasing of the poem and lends balance to not only the individual lines but also the poem itself.

Poets writing tanka in English today often abandon the 5-7-5-7-7 syllabic structure—and often create impressive poems in the process! It remains a moot point, however, as to why such poems should be called tanka as opposed to free verse.

In my own practise of writing tanka, I have viewed the 5-7-5-7-7 form as the ideal to be aimed for; but I have accepted that this ideal cannot always be attained. After all, the ultimate purpose of writing a tanka is to produce a poem. If the traditional structure gets in the way of the poem on a given occasion, then it should be abandoned or altered for the sake of the poem.

Within the 5-7-5-7-7 syllabic structure there is considerable flexibility of arrangement. Many of the Japanese tanka collected in the tenth century imperial anthology titled Kokishu, for example, have a tripartite arrangement, with breaks (in rhythm and/or thought) after the second and fourth lines. Other tanka in the collection tend to be bipartite, with a break or shift occurring after the third line.

I have often employed this latter technique in my tanka. Here’s an example from my book Counterpoise (Angus & Robertson, 1980):

An amber cricket
makes her way mechanically
across the concrete.
Eggs must be laid and there is
so much dying to be done.

As can be seen, this tanka falls neatly into two parts. The first part (lines 1-3) is primarily objective and descriptive, while the second part (lines 4-5) is largely subjective and evocative.

Here’s another example of a tanka arranged so that a shift occurs after the third line. (This tanka is part of my collection, The Colour of Life, in the book Two Poets, which is scheduled for publication by Fremantle Press in July.)

As I lift the mug,
light reflects from its glazing
in the black window—
faint and intermittent like
a lighthouse signal, far off.

While the incorporation of a pause or shift after the third line is an effective way to write tanka, it is certainly not the only way. Some fine tanka have no specific shifts in thought or pauses in rhythm but rather present a single unfolding statement. Consider this example (also from Fremantle Press’s soon-to-be launched Two Poets):

Lady, the lilies
we admired in the paddock,
the arum lilies
so whitely lovely, have died
from the farmer’s herbicide.

This tanka is essentially a single observation arising from the accumulation, line by line, of specific details (although it is true to say that the concluding couplet rhyme gives the impression of a shift from the first three to the last two lines).

Finally, consider an example of a tanka (also from Two Poets) that is somewhat irregular in its outworking. It is essentially a unified statement/image, and yet it contains a shift of sorts, and that shift falls in an unconventional place:

The dotterel,
stalking, sniping—so little
by the muzzle
and muddy hoof of the bull
drinking at the dam’s puddle.

It is worth noting that the first and fourth tanka above deal with nature, while the second and third deal with human nature. This is one of the beauties of the tanka form: it is suitable for any subject and can capture any mood. Stylistically, it can be imagistic or lyrical or elegiac. Its versatility is limited only by a given poet’s imagination and skill.

It is also worth noting that these four tanka employ simple and precise language (as is best suited for tanka generally), and yet they are laced with literary devices. “Cricket” uses alliteration; “Signal” uses simile; “Lilies” uses apostrophe, repetition and rhyme; and “Bird and Bull” uses slant (or half) rhyme and alliteration. The tanka poet may use literary devices and figures of speech like any other poet. It is a mistake to think, as some do, that tanka must be devoid of literary devices. The tanka is a type of poetry, which in turn is a type of literature, and it should be treated as such.