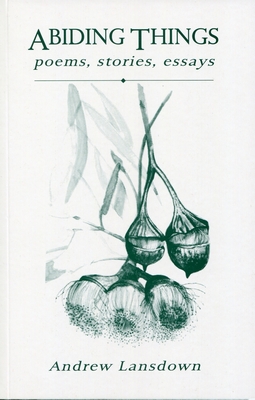 Andrew Lansdown “has what I call a courage of delicacy, and a real unconventionality which resists the busy inertia of received literary attitudes; he is not afraid of concepts such as joy, nor of the literal tears in things. He espouses, though not all the time, an aesthetic of small observations.”
— Les Murray, The Sydney Morning Herald

“Lansdown is a past master at performing one of the chief tasks of a serious poet: to lift the veil of familiarity from the world, to have us see things anew, to re-encounter what we thought we had understood, and to take another look at what we might have consigned to the margins of our consciousness.”
— Rod Moran, Fremantle Arts Review

“Andrew Lansdown has established a clear reputation as an imagist of high order in Australia.”
— Philip Salom, The West Australian

In this selection of Andrew Lansdown’s poems, stories and essays there is a tenderness, a wonder and a deep feeling for human relationships and spirituality. He writes of the darker things that move within our lives, while his observant eye rests on tiny details of nature which open the reader to a richer, wider world. Through his writing Andrew Lansdown discovers, explores and celebrates abiding things.
— Paul Grover

Abiding Things contains poems and stories for children as well as adults.

Go down this page to read the children’s story, “A Cup for a Cop”.

Click here to read “Abiding Things”, a review of works by William Hart-Smith and Peter Kocan, in Abiding Things.

A Courage of Delicacy

Readers of Quadrant will be familiar with Andrew Lansdown’s poetry from these pages. Abiding Things is a showcase of some of this remarkably productive writer’s short stories and essays as well as his verse. It gives an overview both of his rich and coherent vision of life and of his literary versatility.

Andrew Lansdown has been quietly but very steadily building a major literary reputation since he began writing in Western Australia about twenty years ago. He has published eleven books and his work is represented in about fifty anthologies. Like some other West Australian writers, however, he is in some ways much better known nationally and overseas than locally. His heroic fantasy With My Knife, first of a trilogy, and now in its fourth reprinting, has sold more than 25,000 copies in the US, and the sequel Dragonfox was published there recently.

All Lansdown’s writing is notable for its clarity and originality. It is also distinguished by a seriousness of purpose. This is not to say that it is sententious or preachy, but it is informed by a belief that things matter in a moral sense. Although he often writes about small or commonplace things, there is always at bottom a sense that these things are important.

The short essay “What’s So Special About Humans?” reprinted here, reminds one with considerable wit that there is a great deal special about humans. Although quite different in its presentation, some of its feeling reminds me of C.S. Lewis’s “The Weight of Glory” with its message that “you have never met an ordinary person”.

The quality of originality Lansdown displays is something special: it is not the originality of gibberish, but the originality which, in prose, a Sir Walter Scott or a Robert Louis Stevenson showed in their day—that is, the use of highly-developed technique to present afresh profound and timeless things. Among other leading West Australian poets, Rod Moran has praised his ability to “lift the veil of familiarity from the world, to have us see things anew, to re-encounter what we thought we had understood, and to take another look at what we might have consigned to the margins of our consciousness”, and Philip Salom has called him an imagist of high order.

The clarity of the writing, most notable in the descriptive poetry, should be a model for aspiring writers. Andrew Lansdown was a friend of the late William Hart-Smith (of whom he writes here), and has much of Hart-Smith’s almost Oriental gift of achieving a profound clarity through simplicity of expression. His evocations of a West Australian Christmas tree, of night fishing in a harbour, and of the joys and sorrows of family life, are penetrating and unforgettable.

This is by no means the only mode of his poetry, though in every mode he employs there is a great deal of meaning packed into every word. His poetry, much of it written in celebration of nature, has a special quality of showing the world more clearly and reminding us of the wonder of common things, the transcendent that can touch all our lives. It would do these poems less than justice to quote extracts out of context and I urge those interested to buy the book and read them whole.

Lansdown has also distinguished himself in that neglected form, the short story, particularly in explorations of the responsibilities (as well as the joys) of family life. His well-known story “The Bowgada Birds”, reprinted here, is about a family relationship grown sour indeed, and with a notably gruesome ending, but many of his other tales are more positive, or at least point towards the positive. Certainly in some of his work there is the presence of horror, but he is a long way from those writers who, ostensibly bemoaning the nihilism and negativity of life, are in fact adding to it.

All Lansdown’s work here is worth reading, but among the most interesting essays are his tribute to Hart-Smith, a review of the work of the poet Peter Kocan and an essay, “Why I Write”.

Les Murray has written that Andrew Lansdown’s work has “a courage of delicacy, and a real unconventionality which resists the busy inertia of received literary attitudes; he is not afraid of concepts such as joy, or the literal tears in things”. Apart from being consistently pleasurable and thought-provoking, with passages of real beauty and profundity, Abiding Things can be studied with profit by any would-be writer.

A Story for Children from Abiding Things

up for a Cop

When her mother stopped the car at the traffic lights, Kylie said, “What is that cup for on the post?”

Her mother looked at the cap on top of the traffic light. “That’s not a cup,” she said. “It’s a cover. To keep the rain off the wiring.”

“Oh,” said Kylie. She was four. She knew what “cover” meant. You could cover your eyes with your hands. You could cover the table with a cloth. But what did “wiring” mean? And why did you have to keep the rain off it? Perhaps it was like a budgie, Kylie thought. They always covered him when it rained.

“Well,” said her father, “it could be a cup. It might be a cup for a policeman to have a drink.”

“Oh, yeah!” said Kylie’s brother, who was sitting in the back seat. “Oh, yeah, sure, Dad!” Kylie’s brother was eleven. That’s why he talked like that.

“You never know,” their father said, giving Kylie a jab with his elbow. “It just could be a cup for a cop.” Then he chuckled and said it again, because it sounded good, “A cup for a cop! Ha, ha!”

“Oh, you know stupid,” her brother said. “A policeman. Everyone knows a cop is a policeman.”

The red light winked out and the green one blinked on. Kylie’s mother drove away.

The next set of traffic lights they came to turned red and they had to stop again. As they sat in the car waiting for the lights to change a remarkable thing happened.

A policeman roared up to the lights. And he had a ladder tied to his motor bike! He hopped off his bike, untied the ladder and leant it against the post of the traffic light nearest to Kylie’s car.

It was a long, wooden ladder, splotched with paint.

The policeman climbed up the ladder, pulled off the wiring cover and filled it up from a little tap at the back of the lights.

He spilt the drink as he lifted it to his lips. “Oops!” he said, as it sloshed onto the road.

He gulped some more. Kylie could see his Adam’s apple going up and down in his throat as he swallowed.

When the policeman had finished his drink, he pushed the cup back onto the pole and looked around. He had a red moustache from his drink. He wiped his mouth on the sleeve of his leather jacket.

The policeman got a fright from the sound of her voice. He wobbled a bit on top of the ladder.

He climbed down the ladder and poked his head in the car window.

Kylie was shy. She buried her face in her father’s jumper.

“Her name’s Kylie,” her father told the policeman.

He reached through the window and gave Kylie a gentle poke. She peeped out at him.

“Now Kylie,” he said, “you must think I’ve got terrible manners, not offering you a drink of cordial. Would you like one?”

“Oops!” said the policeman. “The lights have changed. That means you’ve got to have lime. Unless you want to wait a minute. Orange coming up,” he said happily. “And after that, raspberry again.”

The cars behind were beginning to honk their horns. They wanted to get going. Kylie’s mother was beginning to feel nervous.

“She likes green cordial,” Kylie’s mother said. “Lime will be fine. Thank you.”

He climbed up the ladder again, pulled off the cup and poured another drink. Then he climbed down and handed the cup to Kylie.

“What?” Kylie said. She had a big, green smile on her face, like a clown.

She drank the rest of the cordial down. Her tummy was fat like a tadpole’s. She gave the cup back to the policeman.

“But what about Ian?” Kylie said.

The policeman looked puzzled. “Who?” he said.

The policeman looked at Ian. “Him?” he said. “No, not him. He’s eleven. He doesn’t believe it. No, he can’t have a drink. Impossible.”

He climbed up the ladder quickly and put the cup back on top of the pole.

The lights were still green. The cars behind were still honking. Kylie’s mother drove off quickly.

But the policeman was too busy tying his ladder to his bike to look up.

“Anyway,” Kylie said. “It was delicious!”