Recently noticed, this comment about (among others) Andrew published in The Australian newspaper earlier this year and written by the esteemed Austalian poet, Geoffrey Lehmann:

If I were to prepare an alphabetical list of Australian poets who are outstanding and whose first books have been published since 1980, my list would be ridiculously long. It would have to include Judith Beveridge, Kevin Brophy, Elizabeth Campbell, Caroline Caddy, Jennifer Compton, Tricia Dearborn, Stephen Edgar, Peter Goldsworthy, Philip Hodgins, Carol Jenkins, Andrew Lansdown, Anthony Lawrence, Bronwyn Lea, Emma Lew, Stephen McInerney, Homer Reith, Gig Ryan, Philip Salom, Andrew Sant, Shen, Craig Sherborne and Alex Skovron. Some of these poets are very different from each other and might look askance at their bedfellows. But all have written memorable and exciting poems.

On visiting the Bull Ranges with a traditional landowner

Pluck out the detecting eye,

break off the pointing finger,

shut up the exclaiming cry—

if only somehow I could!

But it’s too late to stifle

myself now or stop my friend,

who snatches up his rifle

and follows swiftly after

the wallabies I sighted,

whose survival I blighted

simply because I saw them

I was pleased to receive an invitation by the Katharine Susannah Prichard Foundation to judge the Karen W Treanor Poetry Awards. Given that this is the inauguration of the Awards, I felt doubly honoured to be entrusted with this responsibility. My thanks to Fay Dease, Glen Philips, Paula Jones, Katrin Kuenstler and others involved with by the Katharine Susannah Prichard Foundation.

Sixty-nine poems were entered in the Karen W Treanor Poetry Awards, which is a good number for a new competition. As is to be expected, the poems varied greatly in subject, theme, style and tone. Although the quality of the poems was uneven, most were cogent and accessible. This is praiseworthy in an age when pretension and ambiguity are often passed off as profundity.

Before commenting on the winning and commended poems, I would like to make a comment on the submissions generally. I noticed several faults reoccurring in the poems and it may be helpful to mention two of these faults.

The first fault involves the use of clichés. … CLICK HERE TO READ ANDREW’S FULL REPORT

I was very touched, and of course honoured, when Andrew Lansdown asked me to launch his wonderful collection of poems, Birds in Mind: Australian Nature Poems. Ours has been a long acquaintance and friendship, going back to the mid-1970s or so. For a while, we were always the youngest WA poets to appear in anthologies such as Quarry, edited by Fay Zwicky in 1981. And I note that several of our near contemporaries in that anthology have gone on to either better or worse things, but Andrew and I have somehow managed to stay in the poetry-writing business.

Initially, there are several things to note about Birds in Mind. Firstly, the sheer size and scope of the subject matter. The joy in birds is apparent from the title, but they are only some of the creatures and plants the poet celebrates and sometimes mourns. You will also find superbly spare descriptions of, and reactions to, shells, frogs, lizards, kangaroos, crabs, fish, sunflowers, bamboo, orchids, trees in abundance—karri, jarrah, marri, redgum—and much, much more.

Another initial observation concerns the variety of places in which these poems have been published—they have obviously appealed to many different editors, and the Acknowledgements page is really mind-boggling. Apart from appearing in countless Australian journals and anthologies, many have been published overseas, in Japan, the USA, the UK.

A third observation is in regard to the quality of the book’s production itself and the generous 223 pages—no “slim” volume of verse this! … CLICK HERE TO READ FULL ADDRESS

Andrew has a new collection of poetry coming out next week.

Birds in Mind: Australian Nature Poems will be launched by the eminent Western Australian poet and critic, Shane McCauley.

If you live in Perth, Western Australia, you are welcome to come to the launching of Birds in Mind.

Andrew’s new chapbooks are cheaper than birthday cards or thinking-of-you cards – and yet the texts are immensely richer. Consolations is a 28 page collection of 48 tanka and Little Matters is a 24 page collection of 89 haiku and senryu. Both cost just $3.60, postage included. So why not send a chapbook instead of a card to those you are thinking of?

Andrew was the Special Guest reader at the Perth Poetry Club on Saturday 26 September. He read from his recently published chapbooks, Consolations and Little Matters, and from his larger collections, Between Glances and Fontanelle. Promotional details on the PPC website: http://perthpoetryslam.com/perthpoetryclub/node/35

Andrew read 18 poems from three of his poetry collections on Twin Cities 89.7 FM on Thursday, 17 September. The radio program was hosted by Robyn Holmes and Andrew appeared courtesy of the Peter Cowan Writers Centre.

Picaro Press has published a collection of 89 haiku and senryu by Andrew Lansdown. The 24 page chapbook, titled Little Matters, is available through this website for $3.60, postage included. Alternatively, it can be ordered through the publishers website at www.picaropress.com. To download an order form from this website, click here.

Picaro Press has published a collection of 48 tanka by Andrew Lansdown. The 28 page chapbook, titled Consolations, is available through this website for $3.60, postage included. Alternatively, it can be ordered through the publishers website at www.picaropress.com. To download an order form from this website, click here.

One of the merchants on Amazon.com is offering to sell a new copy of Andrew’s fantasy novel, With My Knife, for US $130.56. This website, along with many an Australian bookshop, offers to sell new copies of With My Knife for just AU $15.95!

Download an order form to purchase a copy of With My Knife for $15.95, plus postage.

Three new poems by Andrew have just been published in the July-August issue of Quadrant magazine. One of them, posted here, is a gunsaku (haiku sequence):

with a red leaf.

the evergreens envy your

Andrew has begun a FELLOW WRITERS’ page on his website in honour of various Australian writers who are among his friends and acquaintances. The first writer to be included is the poet and novelist, Hal Colebatch. Have a look. More writers to follow.

(1) “Haiku are poems modelled on the seventeen-syllable three-line poems of the ancient Japanese. Being poems, haiku are a form of literature and may employ literary techniques and may be judged by literary standards. Generally speaking, haiku stir emotion and stimulate reflection in the reader through simple precise objective depictions of things in nature.”

(2) “Haiku are pebbles poets lob into the pond of our emotions.”

This second “definition” is a haiku taken from Andrew’s poetry collection, Waking and Always, which was republished last year by Picaro Press.

The March 2009 issue of Quadrant magazine contains 4 of Andrew’s poems, including the following choka (a traditional Japanese poetic form):

and told them to multiply,

I would observe this robin,

too shy to wear its colour

on its petite breast,

drawn from the forest

by the feather-grey and -fine

smoke of my campfire—

and he also foreknew that

I would by virtue

of his implanted image

and recreate this bird by

speaking it into a poem.

The March 2009 issue of Quadrant magazine contains 4 of Andrew’s poems, including the following tanka (a traditional Japanese poetic form):

Only three days since

they were shorn and already

their whiteness is gone.

Still, who of us has managed

even that long in this world?

Amazon.com is now selling copies of Andrew’s short story collection, The Dispossessed. The book can be purchased for US$17.95. This is an economical price for readers in the United States. Go to: http://www.amazon.com/Dispossessed-Other-Stories-Andrew-Lansdown/dp/1876819308/ref=sr_1_7?ie=UTF8&s=books&qid=1235820886&sr=1-7

The Dispossess can also be purchased from this website (which, given postage and dollar conversion rates, would be a cheaper option for readers in Australia). Click here to download an order form.

Reprint of The Red Dragon

Omibus Books/Scholastic Australia has reprinted Andrew’s fantasy novel, Dragonfox. This is the fourth print run of Dragonfox, which is the second novel in the Chronicles of Klarin trilogy.

Andrew’s essay, “Reading and Reflecting on Haiku”, which was recently published in Zest, the online magazine of the Australian Poetry Centre, is now available on this website. Click here to read the essay.

Australian poets Les Murray, Andrew Taylor, Andrew Burke and Andrew Lansdown enjoyed a chinwag over coffee at Andrew Taylor’s house in Mount Lawley (WA) in March 2008. Andrew L was surprised recently to find photographs of that gathering on Andrew B’s blogsite, Hi Spirits (http://hispirits.blogspot.com/search?q=Andrew+Lansdown). One of the photographs is reproduced below, having been brazenly lifted from Hi Spirits: 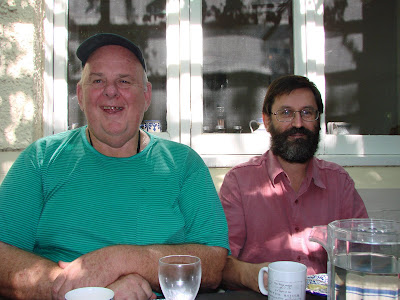 In October (2008) Andrew Burke asked several fellow Western Australian poets, including Andrew Lansdown, to provide a poem-with-comments for his blogsite, Hi Spirits (http://hispirits.blogspot.com/). Andrew L sent Andrew B the poem “Finishing Up”, which Andrew B (confusing, isn’t it!) posted on 22 September 2008. The poem and brief explanatory comments are posted below:

Nightfall … and I am still here

in the school at the prison farm.

My children will be at the table, filling

their mouths with food and chatter.

And the littlest one will be asking

her mother, “Where is Daddy?”

I am where my resignation

has led me. My roguish students

are in the compound, locked up

for the night. Except for the sentries

the guards are gone. I am alone,

finishing up. Did I miss someone

when I said goodbye? Does it matter?

We have been good to one another,

these bad men and I. I try not

to think I will never see them again.

I am alone. I look out the window.

The forest is in silhouette.

On the lawn, almost dissolved

in the dusk, a young kangaroo

hunches on its haunches to graze.

It was not there a moment ago and

in a moment when I open the door

it will not be there again.

Although “Finishing Up” was published for the first time in Quadrant magazine in March this year [2008], it is a poem that I began writing in 1987. At the time, I didn’t feel the poem was good enough to publish and I couldn’t work out how to make it good enough. However, I did feel it had “something” and so I kept it in a file with other “almost” poems. I came back to it last year [2007] and substantially revised it into its present form. And I am pleased with it now.

The gist of the poem is clear from the text of the poem. But a few specific details may be of interest. I was at the time the education officer-in-charge of the education centre at Barton’s Mill Prison Farm. The farm held minimum security male prisoners and was located near Pickering Brook in Western Australia. I had been granted leave without pay for a year in order to write a book on the Swan waterways with the painter Donald Green. The poem picks up on my mood as I stayed late to pack up my things on the last day at the prison.