By Admin
In Haiku, Poems

HAIKU IN THE MAINICHI NEWSPAPER, JAPAN 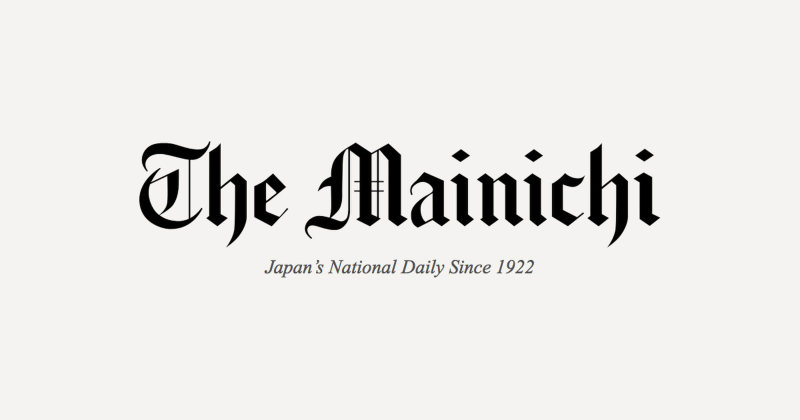 Andrew and his wife, Susan, were in Japan for five weeks earlier this year (2020). As if in celebration of their arrival, The Mainichi newspaper published one of Andrew’s haiku.

It was a complete surprise, as Andrew has never submitted work to this paper.

Apparently, the haiku editor, Dhugal J. Lindsay, recalled a haiku from Andrew’s 2005 Picaro Press chapbook, Warrior Monk, and felt it had something to say about the bushfires that had been raging for weeks in the eastern states.

Andrew’s haiku and the editor’s comments are included below:

than the twilight, kangaroos

The Australian sun is harsh and strong during the day, colors are vivid and edges and shadows stand out. This makes one notice even more the softer edges and muted colors that appear as dusk approaches and the light fades. There is only enough light left reflecting off the landscape to make out the shadows of the kangaroos bounding across the open space between the grass and scrub on either side — they are recognized as kangaroos perhaps more by their movement than by their shape. Although this haiku was made over 15 years ago, with the current bushfires in Australia, the image brought to my mind by “the firebreak” is a swathe of land recently burned to clear off all the flammable grass and scrub while bushfires inexorably make their way towards the poet’s property. The blackened land causes the kangaroos to fade even further into the twilight.

Selected and commented on by Dhugal J. Lindsay

By Admin
In Articles 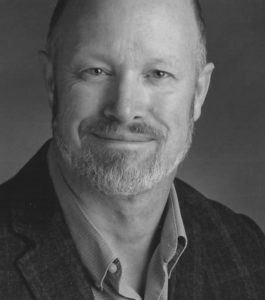 The Canadian poet, D.S. Martin, has kindly given permission for some of his poems to be included on Andrew’s website. You can enjoy them here.

By Admin
In Novels

AMAZON.COM REVIEW OF BEYOND THE OPEN DOOR

Beyond the Open Door is the American title for Andrew’s fantasy novel, With My Knife. (Andrew reluctantly agreed to Scholastic New York making this change on condition that the text remained unchanged.)

An lovely reader review of Beyond the Open Door was posted recently on Amazon.com:

5.0 out of 5 stars My fave book,
Reviewed in the United States on December 15, 2019
by Karla
I told my son he had to read this book in order to be old enough for his own pocket knife. I adore sharing it with him and reading it with him. This was my first big kid book, and I loved mine till it felt apart. I carried it everywhere, and my mum had to tape it until there was nothing left to tape. I’m glad I found it here for my son.
https://www.amazon.com/Beyond-Apple-Paperbacks-Original-Title/dp/0590471600

By Admin
In Novels

GOODREADS REVIEWS OF WITH MY KNIFE 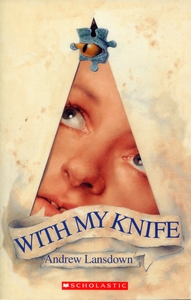 Andrew’s fantasy novel, With My Knife (Omnibus Books, 1992) was shortlisted in 1994 for both the National Children’s Book Award and the Western Australian Young Readers’ Book Award. It was published by Scholastic in the United States under the title Beyond The Open Door (1993); and has been reprinted 9 times since its first release. It is currently available in an a 3-novel volume titled The Chronicles of Klarin (Wombat Books, 2018)—the other novels, Dragonfox and The Red Dragon, being sequels to With My Knife.

Ninety-one readers have rated With My Knife an average of 4.3 (out of 5) on Goodreads, “the world’s largest site for readers and book recommendations.” Fifteen of these readers have written reviews of the novel. A sample:

Sep 26, 2019 Jamie Jonas rated it it was amazing
Another book inherited from my daughter–I expected a “cheap read,” and discovered instead a true stand-out. This story would make an ideal study for a writer who wants to learn the technique of keeping it relatively simple (YA level) while still turning in a tour-de-force of a fantasy story. Needless to say, this is another author I’ll be following.
.

Jun 14, 2016 Rebecca rated it it was amazing
I wavered between 3 and 4 stars. Then I imagined I was a child reading this book (which is the intended audience) and I settled on 4. Then I sat down to describe what I liked about the book and realized that as simply as it was written, I actually loved it and had to change it to a 5 star rating. … I wish I could have read this as a 10 year old. It would have made me cry and would have changed a great many things about how I see the world. I look forward to reading the sequels with my own 10 year old son.
.

Apr 17, 2015 Georgia rated it it was amazing
My teacher read this to me when I was in grade 5 or 6. The story has always stuck with me, but I only recently remembered the title. This is a great book to read to your kids and I fully intend to do so with my children one day. Absolutely loved it.

Nov 09, 2014 Jeanette Schaeche rated it really liked it
… I loved it when I was ten and I love it now. More than likely a book I’ll be reading to my own children, and a book my own children will read one day. “With My Knife” is a lovely piece of children’s fantasy.

Jun 16, 2010 Dee-Ann rated it it was amazing
My son and I really liked this book. Simple fantastical story which keeps you hooked until the end.

Apr 17, 2015 Georgia rated it it was amazing
My teacher read this to me when I was in grade 5 or 6. The story has always stuck with me, but I only recently remembered the title. This is a great book to read to your kids and I fully intend to do so with my children one day. Absolutely loved it.
Read more Goodreads reviews of With My Knife on this website here.
.
.

By Admin
In Articles

Andrew’s poem, “Vikings”, was published in the 21-22 March 2020 issue of the Weekend Australian newspaper’s Review magazine.

“Vikings” is a tribute to the Australian poet, novelist and essayist Hal G.P. Colebatch, who died in September last year (2019). Andrew conducted the service and delivered the eulogy at Hal’s funeral.

The poem grew from an overwhelming sense of loss and reflects Hal’s passion for the sea and seafaring, and his preoccupation with heroism and courage. It also references Hal’s Christian faith, a faith that his wife, Alexandra, asked Andrew to emphasise in his funeral eulogy.

In keeping with the Viking theme, the poem employs the old Anglo-Saxon and Norse poetic techniques of kenning and alliteration.

The only regret Andrew has about the poem is that it was written too late for Hal to see it.

More than women, the Norsemen loved longboats,
craved the pregnant sail on the prow-ploughed sea.
Safeguarded by fearsome spirit-scarer figureheads
they followed lodestone and starlight to far lands.

You, too, my life-long life-robbed brother, prized boats—
skippered them round coves, out to islands, and past.
And for all the wonder and vigour, you loved most
the real-rules and fixed-facts of the guileless sea.

The Vikings were violent vainglorious men,
mean treasure-takers, keen voyagers of quest.
Most of their own making, the foes they fought—
and how valiant they were to violate the weak!

But you waged battles to defend your dears—
and did so bravely, without brag or boast.
Undriven by coin-crave or fame-lust, you set sail
against prevailing winds towards the common good.

Their chief weapon, these ravishers and reavers,
was the Dane-axe, the body-hacker … and, too,
the shield, which, when unneeded in the wall,
was swung for chest-wallop and windpipe-wedge.

You, brother, campaigned not with muscle-might
but with brain-brawn, courage and word-craft.
For weal, not woe, you wielded your ink-sword,
mindful mind-moving serves conquest the best.

At the last they veered, the Vikings, to Christ
and He turned to dust their roam- and blood-lust.
He was the wergild for the blood-debt they owed
to the Sovereign who claims, ‘All souls are mine!’

You likewise saw Christ walking on the whale-road
and heaving to, you hailed Him come aboard.
He took your fealty-oath, this Captain-King,
and to the hoped-for harbour He steered your ship.

Andrew’s poem “Kyoto Autumn Maples” has been published in the February 2020 issue of FreeXpresSion magazine. This set of six tanka won the 2016 Melbourne Poets Union International Poetry Prize and are included in Andrew’s latest poetry/photography collection, Kyoto Momiji Tanka: Poems and Photographs of Japan in Autumn.

By Admin
In General 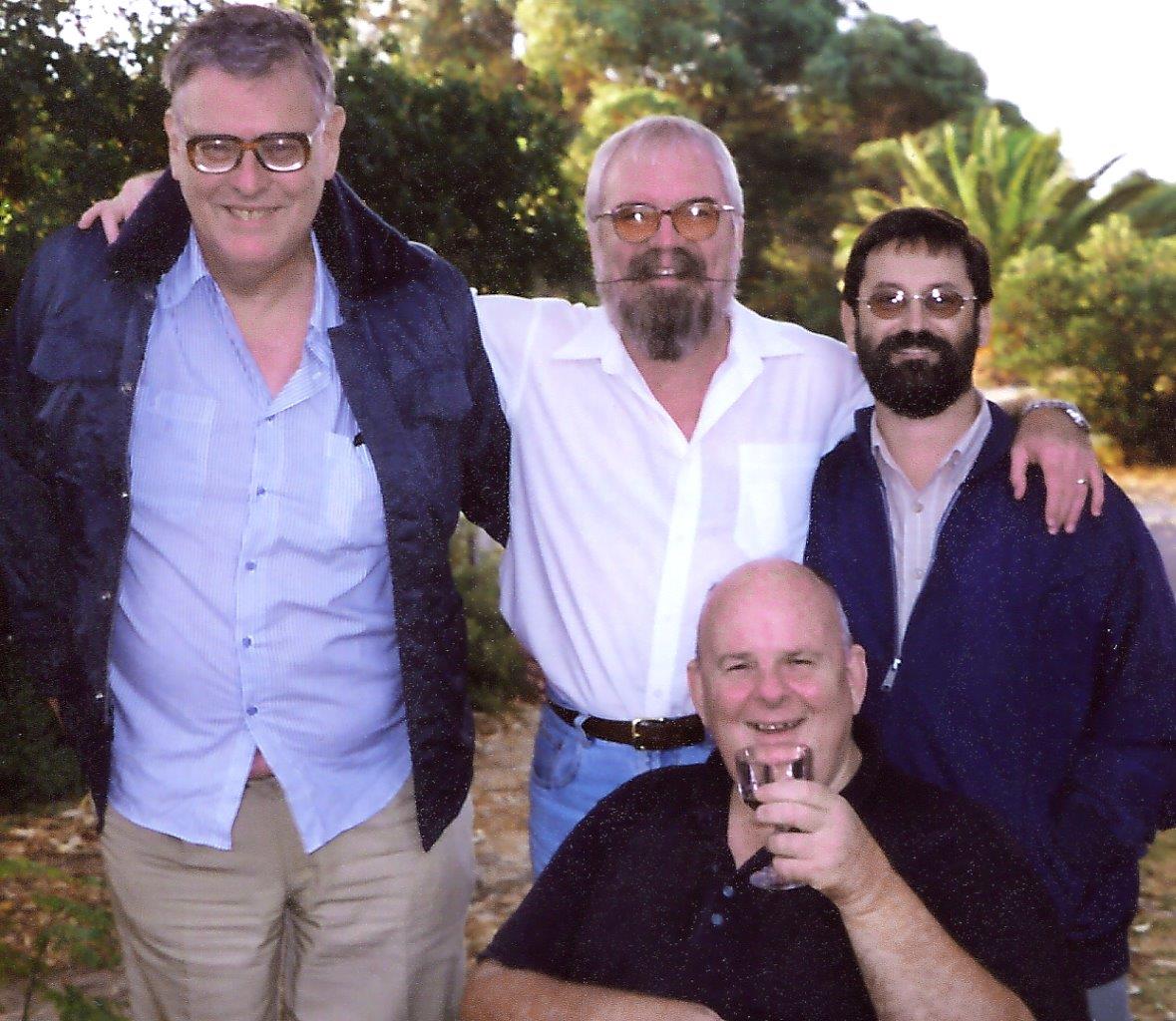 Andrew’s friend, esteemed Australian poet, novelist and essayist, Hal G.P. Colebatch, died on 9th September 2019, and his widow, Alexandra, asked Andrew to conduct the memorial service and to present the eulogy. The text of Andrew’s tribute (plus a postscript) is now posted on this website.

Alexandra [Hal’s wife] has asked me to bring a tribute on behalf of herself and her family. There are two facets of Hal’s life that Alexandra wanted me to focus on—and I am delighted to be able to do this, for I share her conviction that these are, ultimately, the most important—namely, Hal’s faith and his family.

Before elaborating on these matters, however, permit me to make a few brief comments about Hal’s character and his achievements.

Hal was a fundamentally decent and kind man. He was loyal to his friends and generous to those who approached him for help. He was a man of extraordinary intellect and literary ability—and he did not squander these gifts. Indeed, as his astonishing literary output demonstrates, he was the most diligent and vigilant of men. He loved justice and truth and he courageously strove to protect and advance them, knowing that injustice and lies are the enemies of human flourishing.

Hal earned degrees in history and law and gained a PhD in political science. He worked as a journalist, a lawyer, a political advisor, and an editor. And of course, through it all, he wrote, and wrote and wrote.

In October last year, Hal emailed me a copy of his latest, unpublished poetry collection, titled Under a Dragon Moon. In the dedication, he states, “It being time to fly one’s flag, I dedicate this volume to the greater glory of God, and once again to my beloved family, Alexandra, Katie, Alexander and James …”

And this brings me to the two things that Alexandra wanted me to emphasise in this tribute—Hal’s faith and his family. …

POEM IN THE MOZZIE

The November-December 2019 edition of The Mozzie (Vol 27, Issue 8) contains Andrew’s poem, “Miscellaneous Thoughts on Poetry”, which is a suite of 3 tanka, titled respectively “On Poetry and Photography”, “On Imagist Poetry” and “On Japanese Poetry”.

POEM IN THE MOZZIE

“Windbells with Bamboos” is a tanka suite rather than a tanka sequence, as each tanka is a self-contained poem. Nonetheless, placed together the poems make something larger than themselves.

I see it again
in the sacred trinkets stall
at Inari Shrine—
the little windbell voicing
its verve on my veranda.

I dangled it there
among the Buddha bamboos
in the shiftless air—
the windbell that days before
had dinged too much by my door.

It’s not quite what I
wanted when I hung the wind-
bell in the bamboos:
they cherished it as their own
and coddled to death its tone.

One of Andrew’s poem, “Sonnet of Thanksgiving”, has been included in Poems for Ephesians: Poems Inspired by Paul’s Epistle to the Ephesians, a web anthology edited by the Canadian poet, D. S. Martin, and hosted on the website of McMaster Divinity College in Ontario, Canada. Read “Sonnet of Thanksgiving” at https://mcmasterdivinity.ca/poems-for-ephesians/

POEM IN EUCALYPT: A TANKA JOURNAL 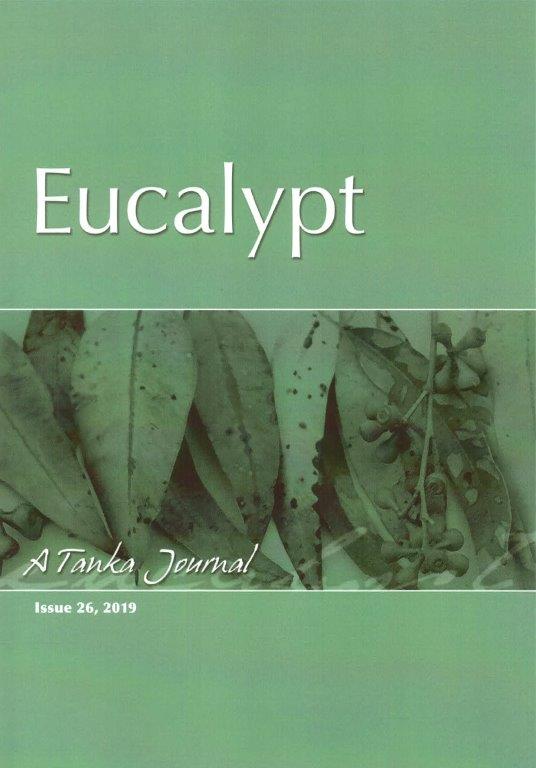 Eucalypt: A Tanka Journal (Issue 27, 2019) has published one of Andrew’s tanka. The (as yet) untitled poem is reproduced below:

come the climax
of their glory, the maples
are spent, as once
on cracker night heaps of trash
blazed awhile then turned to ash