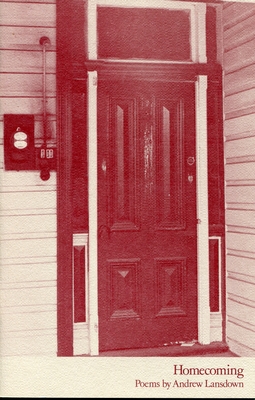 Andrew Lansdown was born in Pingelly, Western Australia, in 1954. He began writing poetry in 1972, and submitted his first work for publication in 1974. Since then he has published nearly one hundred poems in approximately twenty literary journals in both Australia and New Zealand. He has also published short stories and critical essays in a number of journals. His poetry and short stories have been broadcast on the A.B.C., and he has won several poetry prizes.

Andrew has gained Arts degrees at both the Western Australian Institute of Technology and Murdoch University and has tutored at W.A.I.T. in Creative Writing. He currently teaches Leaving English at several evening Technical Schools and is writing booklets for the Education Department on aspects of traditional Aboriginal culture. He is married and has one son.

We stand on the shore
and cast out to the dark sea.
We wait for something
unknown to bite, for the tug
at the line’s faraway end.

The Laughter and the Hammer

My older brother and his friend
told me it was real:
a small creature with a stick
in its fist and a drum strapped
to its belly. It walked
along the work-bench—I am not sure,
perhaps it stood still—beating
its drum. They said
it was a cricket. Jiminy!
they laughed
as they smashed it with a hammer.

For years afterwards
I kept a look out in the garden
knowing that only the sight of another
could atone for what I had seen.

Strange—even though I know
it was plastic, now—
how it still haunts me:
the cricket in its red tunic, like a soldier,
beating its drum;
the laughter and the hammer smashing down.

As we sit talking
about poetry

my son (still months
from walking)

lounges without a care
on my knee, fronts

my old friend with
a vacant stare

spasmodically stops
our talking with

a short sigh
and lifts and drops

his foot rhythmically
on the flat of my thigh.

Publication of this first book of poetry by a young West Australian writer is another very creditable achievement by the Fremantle Arts Centre press.

In the few years it has been operating this press has brought out an impressive list of high-quality first books by writers whose work is certain to be remembered long after the already-fading geniuses hailed in Australian Poetry Now or New Writing in Australia have had the last dusty memory-hole sag shut behind them.

Andrew Lansdown is a professional writer in his early twenties, who has published a remarkable amount of diverse and admirable work in a very short time (readers of Quadrant will be familiar with some of his poetry and social essays), including more than 100 poems in reputable journals in Australia and New Zealand.

Even in a small collection like Homecoming the stamp of a powerful individual talent is unmistakable. The author is unusual for a young poet in many ways. He is, for example, concerned in his poetry with expanding rather than diminishing areas of human feeling and understanding. Further, his work is frequently explicitly religious, with a commitment to traditional fundamentalist Christianity quite unusual to find in technically, conceptually and even politically sophisticated poetry like this.

One of the most striking features of his serious poems is their sustained imagistic and intellectual power, as this extract from “The October Revolution” may indicate:

It was not long before we knew

that the sun would always hang, for us,

just below the black rim of the world.

Our skies put on the twilight like a uniform.

Our earth dressed in a sepia of grey —

without depth of shadow or distinction of light,

without bright of colour or sharp of shape.

We have become winter rivers

rigid on top, flowing always below

conforming to the dictates of our only season …

Striking a grand but essentially empty pose is all too easy for a young poet. Though Andrew Lansdown is not afraid of grand gestures, there is an untypical strengthening wisdom within his work. Further, the reader becomes aware that Andrew Lansdown does not regard his gifts of perception and articulateness as simply [a] means for self-advertisement of those perceptions. He conceives of poetry as having a purpose: a very large and serious purpose, in which the role of the poet and even of the poem as artefact, is a humble one. I doubt he could ever join the ranks of those who try to write poetry in order to be able to regard themselves as poets.

Untypically, too, for a young poet, there is no self-pity in his visions of the world, that succeed in celebrating without sentimentalising or trivialising, as in “Rosa Glenn: Tree”:

in dimension and beauty.

Framed by the door

She claws at the

turn her smooth silver to green.

My small hut is

and the song of her magpies.

This is, in its way, a quite perfect poem. To stand it beside a chosen piece of other, noisier poets would be simply to be cruel to the latter. Ezra Pound said that one gets tired of promise. It is enough to say that Andrew Lansdown has already moved a long way from promise towards substantial achievement.

This is a very short book of poems, which is Andrew Lansdown’s first. Many of the poems have appeared elsewhere, and the collection of 29 pages only just exerts sufficient pressure to justify the book form.

Fortunately, however, the author is a fine poet. These are restrained lyrics Imbued with a beautiful sensitivity, especially where the natural world is concerned. Several, with their gentle luxuriance of sun and nectar, are reminiscent of the Spanish poet, Juan Ramon Jimenez:

with wafers of wine …

There is sterner stuff too, though as with any collection of this type, it can merely serve notice as to what this poet is likely to produce in the future. A poem based on Koestler’s “Darkness at Noon” ends with the disturbing line:

Buth! the bullet bursts into the brain

and “The October Revolution” brings together his deep sense of the power of the natural world, a power irradiated with a divinity other than pagan, and the comparatively petty social upheavals of the human world:

Yet still our hearts danced with joy

(and my voice almost dared to sing)

when the first Spring gushed upon the land.

A challenge to the commandments of the Movement!

A challenge beyond their control!

The sap shooting up to the sun,

bursting in salvoes of green!

The seeds flaring from the dank dark,

firing the fields with red and gold!

It is a pity that the publishers have not elicited a longer collection, and produced a book with a spine. Books produced as is this one are unlikely to sell well, since they are invariably associated with second-rate writing.

In this case, that would be most unfortunate, since this book is well worth reading. I, for one, await Mr. Lansdown’s first substantial book with enthusiasm.

The final voice I want you to listen to is that which speaks poetically of poetry. The poem is called “On Poetry”; the author is Andrew Lansdown, who was born in 1954 in Pingelly, W.A., and who, like the others, has published widely. His first book of poetry, Homecoming, was published by the Fremantle Arts Centre Press in 1979; two more books of poetry, Counterpoise (Angus and Robertson) and A Ball of Gold: Poems for Children(The Nine Club), are scheduled for publication in 1981.

The voice of “On Poetry” is a father’s voice. In the poem the speaker talks about talking about poetry. The speaker’s infant son, “still months from walking”, and we assume from talking, conveys more, however, the poet-speaker acknowledges, than poets themselves do. This is another piece, then, like Olive Pell’s, which verbalizes the eloquence of a non-verbal communication. The “statement” made by the young child is, in the love of his father, more expressive, although unarticulated, than his father’s philosophising about Art could ever be. It’s an exaggerated statement about understatement, but I’ll let the poet make the point for himself; he says:

As we sit talking

lounges without a care

on my knee, fronts

my old friend with

and lifts and drops

on the flat of my thigh

The ironies of the situation are evident, I think. Two adults are discussing poetry; one child is enacting a poem. His sigh, his movement, the rhythms and resonances of that “foot” on the flat of [his Dad’s] thigh”, show the child to be poetry. This short poem suggests the connections between life, love, and art, and it says a great deal without saying much at all. One idea that it implies is that we should all stop talking about poetry from time to time, so that we can hear the real artists speak.