Poem in Anthology, This Gift, This Poem 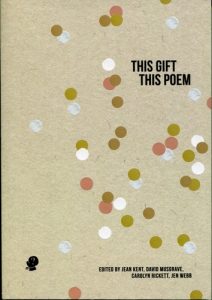 Andrew’s poem, “The Homecoming”, has been published in the anthology, This Gift, This Poem, edited by Jean Kent, David Musgrave, Carolyn Rickett and Jen Webb, and published by Puncher & Wattmann.

When the editors wrote to Andrew requesting a poem in March 2021, they explained that “the motivation behind this current project is to create a collection of poems which would serve as a gift for people in hospital, and for their loved ones and carers who may be supporting them during the anxieties of illness.”

One of poetry’s chief purposes is to draw people together. It has always been a means for communicating stories, beliefs, customs, and values of a people. In moments of crisis, we turn to poetry because it has that unique ability to express and formalise emotion, to bring something of ourselves into being. This anthology, This Gift, This Poem, does exactly that, keeping readers in its tender yet bracing hold. …

Copies of This Gift, This Poem can be purchase via the publisher’s website, here – https://puncherandwattmann.com/product/this-gift-this-poem/.

After accepting Andrew’s poem, the editors asked for a “Reflection” to accompany it. Both are reproduced below:

As the car pulls up
the pup goes prancing to the door
to greet my grandkids.
Though I stay put, I too feel like
yapping and rolling on the floor.

I hear the dog greet
my grandchildren in the drive.
Shortly, they’ll enter
my study with jostle and shove
and paw at me for scraps of love.

Two things came together to move me to write “The Homecoming”. First, my wife, Susan, and I were looking after our grandchildren in their own home while their parents were overseas. Second, a close friend, Hal Colebatch, died and his widow, Alexandra, asked me to conduct his funeral service and to deliver the eulogy. While working on the eulogy one afternoon, I heard the children’s dog go berserk with excitement as Susan drove into the carport, bringing the children home from school. And, like the dog, I felt a flood of anticipation and happiness, emotions so at odds with the ones I had just been experiencing. I immediately felt an urge to try to capture some sense of this joy, this gladness, in poetry. So I began work on several short poems—poems modelled on the ancient Japanese poetic form known as the tanka (or, waka), which consists of 31 syllables arranged in five lines of 5, 7, 5, 7, 7 syllables respectively. Over the next few days, I wrote half-a-dozen tanka, and finally settled on the two that now sit together to comprise the poem, “The Homecoming”.