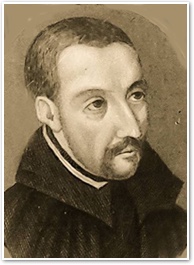 Andrew has added to his website 2 outstanding Christmas poems by the sixteenth century English poet, Robert Southwell — “The Burning Babe” and “A Child My Choice”. These two poems are exceptional from both a devotional and a poetical point-of-view. Southwell’s love of Christ is accentuated by his love of poetry and his exception mastery of poetic technique.

The great English poet and playwright, Ben Johnson, once remarked that if he had written Southwell’s “The Burning Babe” he “would have been content to destroy many of his” own poems. Quite so. See for yourself:

As I in hoary winter’s night stood shivering in the snow,
Surprised I was with sudden heat which made my heart to glow;
And lifting up a fearful eye to view what fire was near,
A pretty babe all burning bright did in the air appear;
Who, scorched with excessive heat, such floods of tears did shed
As though his floods should quench his flames which with his tears were fed.
Alas, quoth he, but newly born in fiery heats I fry,
Yet none approach to warm their hearts or feel my fire but I!
My faultless breast the furnace is, the fuel wounding thorns,
Love is the fire, and sighs the smoke, the ashes shame and scorns;
The fuel justice layeth on, and mercy blows the coals,
The metal in this furnace wrought are men’s defiled souls,
For which, as now on fire I am to work them to their good,
So will I melt into a bath to wash them in my blood.
With this he vanished out of sight and swiftly shrunk away,
And straight I called unto mind that it was Christmas day.

To read Robert Southwell’s equally outstanding poem, “A Child My Choice”, go to the OTHER POETS & POEMS/ ROBERT SOUTHWELL page on this website, here.