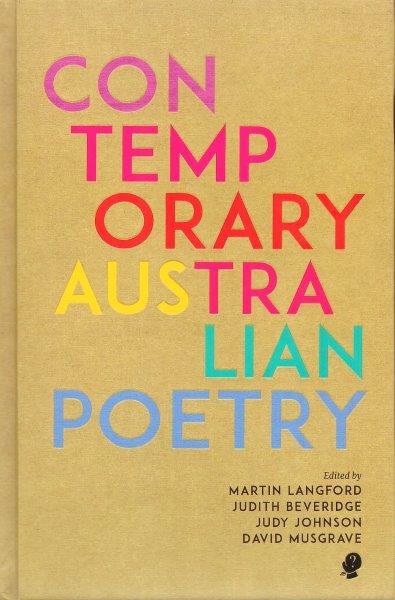 Andrew’s poems in the anthology are “His Free Hand” and “Meditations on Pain“, selected from his books Fontanelle (Five Islands Press, 2004) and Inadvertent Things (Walleah Press, 2013).

“In the past 25 years, Australian poetry has reached a remarkable level of  achievement. Never has the quality been stronger, nor the number of distinctive voices greater. The best poetry produced in this country is world-class.

“Australian poetry has become both self-sustaining – a major source of inspiration and dialogue for Australian practitioners – and also a vital part of the larger conversation in the English speaking world. Puncher & Wattmann has now published Contemporary Australian Poetry, bringing together this extraordinary accomplishment.

“The four editors are poets of longstanding achievement. As editors they have had extensive exposure to the variety and scope of Australian poetry over many years. Martin Langford is an anthologist, essayist and poetry reviewer for Meanjin. Judith Beveridge has edited numerous anthologies and was poetry editor at Meanjin 2005- 2015. Judy Johnson was Managing Editor for the Wagtail series of chapbooks 2000-2011 and David Musgrave has been publisher and editor of Puncher and Wattmann since he founded P&W in 2005.

“What was the criterion for considering work for the anthology? Firstly, that the poet should have published at least one book during the period under investigation. For a decade, the editors researched and read exhaustively: collections, chapbooks, anthologies, journals. There was no unqualified acceptance of particular opinions or preferences. The editors read every poem brought to the table for consideration. Each poem included in the anthology has been approved by at least three out of four editors. Nevertheless any selection, as the forward states … ‘can only be made through the unstable lenses of competing poetics and claims.’ Contemporary Australian Poetry is not intended to be an end in itself, but a starting point for the competing opinions which might emerge.

“The most rewarding result of the editors’ reading was the growing estimation of how many quality poets are practising in this country. They came to the conclusion that thirty or more poets are capable of producing not only a single stunning poem, but of sustaining a high level of accomplishment over many years. These poets have the capacity to control every nuance of tone and meaning in their work and to finely calibrate implication against the complexities of context.

“One of the purposes of Contemporary Australian Poetry is to provoke any public narrative which dismisses such a remarkable number of fine poets and leaves the genre itself in a small, airless cupboard under the stairs of our literary culture. While no one was looking, our poetry has become too large for the space set aside for it, too important to be quiet, and too insistent to be ignored. It has evolved into one of our country’s greatest cultural achievements. But this too is merely a claim. Perhaps it is better for the reader to pick up a copy of Contemporary Australian Poetry and draw their own conclusions.”