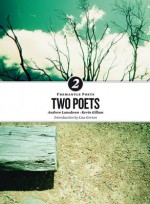 Australian poet and critic Lisa Gorton wrote the introducion to the Two Poets, a 228-page book published in 2011 by Fremantle Press to showcase the work of poets Andrew Lansdown and Kevin Gillam. The first half of Lisa’s introduction focuses on Andrew’s work and begins:

Here are two markedly different Western Australian poets. Both pay attention to small facts of nature. Both treat poetry as a work of intimacy, not performance. In tone, both poets are closer to the voice of the diary than of the cafe or pub. Even when they deal, as they often do, with suburban domestic life, their poems mark out a place of inwardness. Yet their collections reflect and create different imaginative worlds. In particular, these two poets relate differently to time: Lansdown’s poems work to distil and preserve a single moment, whereas Gillam’s work to capture the moment-by-moment experience of time. Intriguingly, their writing habits reflect this difference. Lansdown works in a study, seated at a window, looking out. Gillam gets ideas for poems walking the back lanes around where he lives. This difference could be said to define the nature of each poet’s achievement.

Lansdown engages consistently, though by no means exclusively, with the austere Japanese tradition. Almost all his collections include haiku or tanka sequences: short poems in syllabic verse that capture a single observation in exact and simple words. As one of Lansdown’s poems puts it, ‘Haiku are pebbles/ poets lob into the pond/ of our emotions’. Lansdown brings that understated discipline to his descriptions of the Australian landscape. …

Read the rest of Lisa’s comments about Andrew’s collection, The Colour of Life, in Two Poets here.

Two Poets retails for $24.95 and can be purchased from Fremantle Press here or from Penguin Books Australia here.