Poem in Engaging Rome and Jerusalem 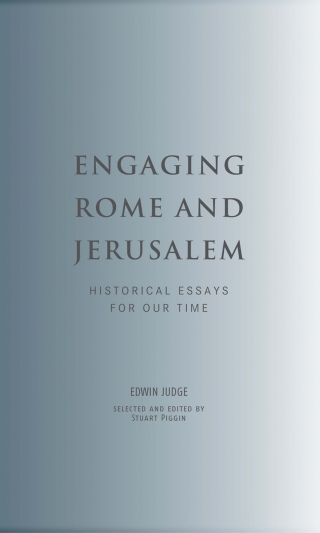 Andrew was delighted to discover recently that one of his poems has been published in a collection of essays by the eminent Australian historian, Edwin Judge.

Professor Judge’s book, Engaging Rome and Jerusalem: Historical Essays for Our Time (ISBN 9781925003901), was released by Australian Scholarly Publishing in 2015.

According to the publisher’s website, the book is “A collection of Edwin Judge’s essays on the angst and contradictions in modern civilisation in terms of the unresolved tension between Classical and biblical thought.”

Andrew’s poem, “Reaction to a Retard”, accompanies the essay “Who Programs Our Values?”, which is developed from “an oral presentation at the conference on ‘Mind and Machine’ held at New College, University of New South Wales, on 26 November 2004, in a session shared with the poet Andrew Lansdown” (p.185).

“Reaction to a Retard” was first collected in Andrew’s award-winning book, Between Glances (William Heinemann Australia, 1993). It is reproduced below:

Reaction to a Retard

Disgusting, really, the way it disfigures
the face—a lack of intelligence. The retard
on the ferry has nothing going for him
except his mother, who gives him a regard

I struggle to comprehend. I hear a quick
voice cry, Better to kill him before birth!
I look at him and shudder at my own depravity.
How easy it is to deny a person worth—

to limit the human, which is the image
of God, to the beautiful and clever,
and to forget there is in every person
a spark, a spirit, that abides for ever.

There is a worse disorder than the damaged
brain that disfigures the blameless face.
It is the derangement of the cogent mind
that deforms the heart by a denial of grace.