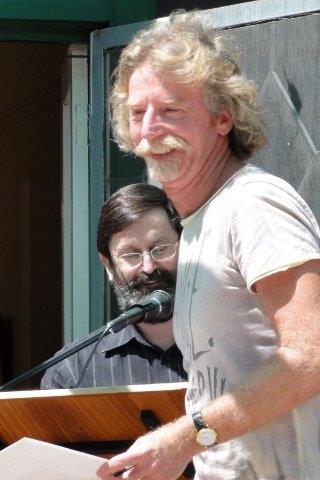 The Katharine Susannah Prichard Writers Centre invited Andrew to judge the Karen W Treanor Poetry Awards late last year (2013) and he delivered his Judge’s Report with the announcement of the winners at a ceremony at the KSP Writers Centre in December.

Andrew’s report, which contains pertinent observations about poetic standards and the judging process, is reproduced below:

I wish to thank the good folk of the Katharine Susannah Prichard Writers Centre for inviting me to judge this year’s Karen W Treanor Poetry Awards. I count it an honour that the Centre has entrusted me with this task for a second time in five years.

The poems submitted to this year’s Awards were wide-ranging in subject, theme, mood and setting. As one might expect concerning entries in a literary award, the entered poems varied widely in competence and quality. Yet I am pleased to say that the overall standard of the entries was good, and I commend all the poets for their work and for their willingness to have it judged according to literary standards.

It may surprise entrants to know that there isn’t much subjectivity involved in honestly judging a literary competition. There are objective standards of literary excellence against which every poem can be judged. One such universally acknowledge standard, for example, is that cliches are “bad” and have no place in “good” poetry. (Two exceptions to this standard are: firstly, humorous poetry where cliche is knowingly use to get a laugh or, secondly, narrative poetry where cliche is knowingly used to profile a person as someone who is shallow and/or conformist. But both these exceptions depend for their impact on the fact that they are exceptions to an accepted objective standard and that not only the writer but also the reader understands this.) Another universally acknowledge standard is that metaphors must involve both original and plausible comparisons—whether they are fanciful comparisons like the metaphysical conceits of John Donne or realistic comparisons like the imagist vignettes of T.E. Hulme. Poems can be objectively judged against the objective standards of literary excellence, and it is the task of the literary judge to do precisely that.

This does not mean, of course, that there is no subjectivity involved in the judging process. The poetry judge will have his or her own perspectives and preferences …